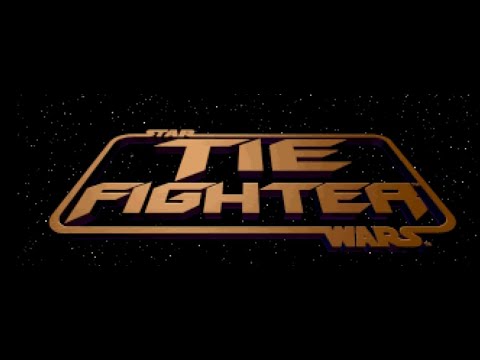 The old TIE Fighters collectors of the cdrom was my first Star Wars game played in a computer more 20 years ago. Perhaps by this reason, it is my favourite. It was a older version than the version showed here. I remembered play it more of 8 hours without stop, it was very crazy, I had a joystick Logitech Wingman Light, it was new and I broke it when I reached the 6 am. 🙂 It could not resist more.

The TIE Fighter game let you to play several campaigns as an Imperial pilot. It follows several stories with great detail and the missions are very well created. You can find in it everything which you could not find before. I can imagine how good was it for the previous players from the old X-Wing because the amount of units, ships, starbases, everything was huge. Even with the first older graphics, it was very fun.

The version showed in this video is if I am not wrong, the third from this game with different graphics released by GOG and modified by several people because the GOG release does not run very well in modern computers with Windows 10. The game from this video is the GOG 1998 version with the TIE Reconstructed https://www.savingcontent.com/2014/08/09/guide-play-x-wing-tie-fighter-series-on-windows-7-windows-8-windows-8-1-with-an-xbox-xb1-playstation-ps4-controller-flight-stick/7/ this special version has even the old midi music improved but as you will see, I do not like too much it and I used the old John Williams music which it changes with each mission event, victories, loses and more.

This version was released less of 20 years ago and it was a improved version with 3D graphics created with the engine from the most modern Xwing vs TIE Fighter. The XvsT added multiplayer but in a first place, it had not a campaign, just the expansion Balance of Power added it but comparing to the TIE Fighter, it was worse. However the TIE Fighter with the most modern 3D graphics looked good. But you must know how even with 3D graphics all these Star Wars simulator games from Totally games use a bipmap texture system and by this reason, they are not too perfect even for 20 years ago. But the design of missions, controls, stories and more compensate this graphic problems.

I started to play again the TIE Fighter because I am adding more new missions to my EAW Steam campaign from the mod named Alliance. These missions as many before are based in the missions from the Xwing-TIE Fighter games. I can not make exactly the same but I can add something following the same story arc.

Probably I will record all the missions played again by me with it. I hope my old joystick do not break, it is a good but old Wingman Extreme 3D Pro, this model and the model before was very good, I have both running, they were better even than the old thrusmasters, I had one and it crashed as many before but these Wingman Extreme 3D can support thousands of hours without problems.

Time for the mission 2, the first missions are easy, they have not mayor problems more far from to fly with TIE Fighters, TIE Bombers or TIE Interceptors, ships very fast but with a complete lack of armor or shields. Curiously, in the game Xwing vs TIE Fighter, in the expansion Balance of Power, there were missions with advanced TIE Interceptors adding shields (at least if I do not remember bad).

In this game, you have alternative secondary objectives where you jump positions arrive in the secret order from the Emperor. Mostly these goals follow the main story from the game. Probably I will add these things at others, as videos in the FOC Alliance, it is not difficult and they can increase a lot the fun playing the campaign.

This playing with the Empire. With the Rebel Alliance, I will add missions from the old X-Wing and probably I will record the mission videos with one exception. I will play if I can the mod from the old X-Wing in the X-Wing Alliance, it is better and it runs good. There is a complete TIE Fighter mod for the X-Wing Alliance but the last time that I checked, it had a trouble, it can look a very tiny problem but the Missile Gunboat can not use the abililty increasing the output in engines giving you a lot more of speed, without this, you can not complete very well some missions and it is a bit sad. By this reason, I prefer the original from 1998, it is more than enough for me.

3 missions in one video. In last video, you can watch the first part from the Lulsla battle added in the FOC Alliance in a single battle. Only the final two battles from the first campaign are a bit more difficult if you try complete even the secondary objectives. The game can look easy but there are 13 campaigns and difficulty will be increased with them. For a person who he has not played too much for years to this game, it is fun and enough. 😉
I have added the last battle from the Lulsla attack.