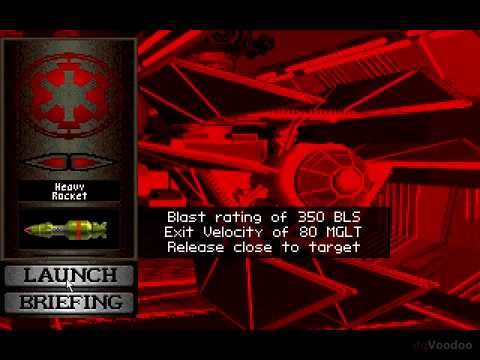 The Campaign 8 is longer than others before, it is the point where you start the battles against Zaarin forces and it is the point where you combat with better units as the TIE Defender. Compared to the TIE Advance, it has better shields, better speed, it can mount a lot of balistic proyectiles and as you can see in the missions, a particle beam, it prevents enemy targets from move and it reduces in a lot of time the dogfight and of course it is perfect in the combination of the missiles.

Most of the missions from this campaign are defense of space factories. You can see one funny point from the game. The TIE Defender has ion guns and when they are used as a TIE Bomber by example, it is destroyed. It is a perfect weapon against them because you destroy them in less shots.

I had a lot of troubles recording the missions and playing, some of them are not so easy. But it was very funny.

Mission one from the campaign 8. A defense from a factory evacuation. It is ironic because the Empire says how it wants save the workers from the factories but at the end of the mission, you discover how it saved just the useful technicians.

Mission two from the campaign 8. Zaarin tries to steal resources from factories and you must destroy them. Very simple but not less easy.

Time to recapture a factory. I needed repeat this mission several times as others because I wanted to get all the objectives, primary and secondary.

Avoid a Rebel attack in the previously captured factory when the Empire is making a resupply. The enemy fighters are not a problem but you must destroy some corvettes.

In the previous mission, the Rebels used a new proyectile, the Mag Pulse, it disables enemy ships. I added it in some Rebel Fighters from my Star Wars Empire at War FOC Alliance Rebellion mod. The mission is not difficult but must disable some enemy transports, all them in perfect order and avoid the enemy fire.

Final mission from the campaign, Zaarin tries to trap the Imperial forces with a Interdictor. It is not a easy mission because you must destroy the Interdictor Harpax. By default, you must use the Mag Pulse, each proyectile disables the starships 15 or 30 seconds, it is a too short time against a big starship fighting at the same time against the enemy fighters.