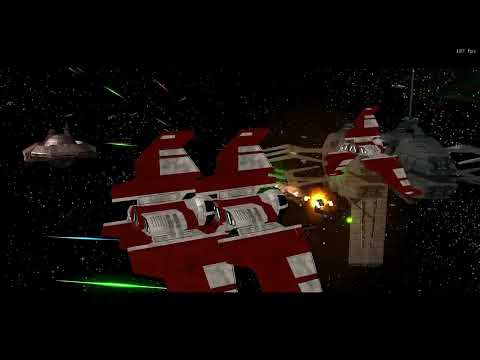 Well, this goes to be a backward. After several problems, I do not go to use the previously showed system for the Starbase reinforces. It was imperfect and too complex.

Instead of this, I will divide each era in one or two game tech levels where inside of them
there will be several new reseachs.Obviously the Empire and Rebel Alliance do not require more research because it was made before in the Rebellion GC.

But the Republic, CIS, Fel/GA and Krayt Empire will require some of them, not many as the Rebel/Empire but some of them focusing the game a bit in the research. At the end, the main big difference from the Alliance mod is increase the strategy capabilities from the game.

The new Starbase reinforces work from this way, they are spawned depending from the
game tech level. Tech level 1 & 2 for Clone Wars, 3 & 4 for the Empire, 5 Legacy era.

With the addition from the new research, there will be 16 different tech levels really. As minimun.

The 5 Level Starbases can be builded in any tech level with any era, it will not be limited.
Just the reinforces are different in each tech level.

It is a much more perfect system, easier. But as always, there are problems. The Rebels in the original game uses a tech level downgrade in one position. If in the code you write tech 5 with the Empire, it is tech 5. With Rebels tech 5 is the number 4. Big problem? 0=1 but if I write the reinfoces from them for the 0, these reinforces will be spawned always in all the tech levels.

Anyway, it goes to be confuse for you when in fact it is so bad for me…but it will work. However, I do not go to use the slicer. Just pure and new research.

Being the game divided by eras, it will add a lot of variety. The jump between eras will be set by your success conquering the galaxy. With each change of era, the owners of the planets will be redistribuited. You and the enemy will lose territory. After the jump from Galactic Republic to Empire by example. You will lose the capability from build the structures from the CW. But probably several parts from the galaxy will have units
and structures from them and you or the enemy will be able build the older units in these planets.

It is the funny point from this type of all era GC, the points
where the eras collision between them.:) You can reach the Legacy era and you will find units from Clone Wars or the Galactic Civil War. In your hands or in the enemy hands.

About the Stations previously created for the additional factions…….well, at this moment, I am not sure about what I go to make exactly with these stations. I have several different ideas in my head.

We will see what happen with all the other features. Enjoy the battle.