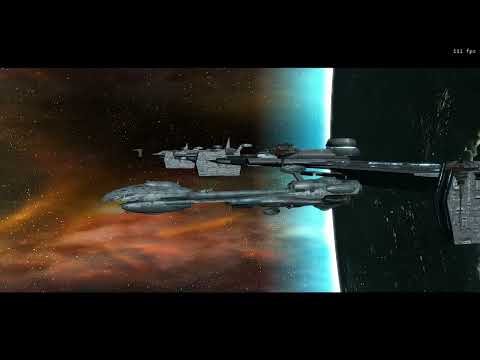 The next version is closer but how many closer? Well, it goes to depend from the goals. Now I have finished my primary goal which it was to create new orbital big planets with new models and improved textures.

The secondary goal was a bit longer, it was edit all the space and land maps getting new preview images which I could improve them. Now, these preview images showing the maps before the battle or the ground map in the galactic mode look much better.

The addition from units as the MC20 was a goal but I made it one month ago.

Another primary goal was the finish from the Insurrection GC. It is almost done, just I need finish some parts from the Rebel version. Probably when I finish it, I release the last version and the addition of new planets as Scarif be in the next update.

Speaking about the new Insurrection GC. It is a GC set by stages, with just one GC size where many planets are hidden in the begining and you will not play with more of 100 planets unlocked at the same time but where the human player can choose what is locked after each stage. The player will be the responsible from the GC performance if he does not accept the lock from several planets after the different stages.

The planets unlocked after each stage will show new enemies and challenges for the human player. It will be a GC thought for realize more an offensive behaviour than a defense. Nothing new, most of the GCs in the mod are set with this purpose. Some players can think how it is very difficult but there is not a medium option, it is as you play here or a way with a frozen AI. It is one of the things which we could see in the mod before.

Anyway, the FOC Alliance is a mod more for advanced players which they search a mod where they can be playing for weeks without be bored.

You can read here the list of changes done by the moment.