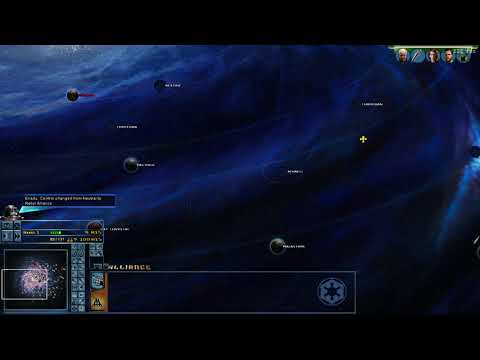 After discover how the Insurrection GC by stages is again a error. I say again because it was not the first time that I tried a GC like this unlocking planets and before there was the same performance problem. But now I am making a much more smaller version, just with the important planets.

It will be the third version from the Insurrection GC. The first was a GC very similar to the Rebellion GC, the second is the by stages GC and now this.

This time, I have thought another feature. The biggest problem from the game is how you can not make a GC with all the planets because it will have a lot of lag. There is not a computer capable of to run it without problems. By this reason I have been thinking this point. You do not need all the planets, just you want play all the space and ground battles really. If I make some points in the GC where you play several battles when you enter a planet or reach a time line, it will be very fun. Just something as a campaign but easier.

At leas now. I am thinking in battles similar to the Challenge mode. Where you can build units inside a battle. Where conquer a planet can open a operation with more of one battles in different planets, probably planets which you would find close to the conquered planet. I have made similar things before.

Now just I need create it. It will be a matter of many code and testing. Nothing new. As you can see, I have added several new planets at this new GC. They are Scarif, Christophsis, Serenno, Almania, Jedha, Kafrene Asteroids, Wobani, Eadu, and Lothal. They are from different time eras and probably I will add as you can imagine some new heroes. It is just a matter of time.

About the mod, I will continue updating it while I make it with other things as fixes. I will continue adding space units with damaged detail and some new units. I have made waiting be added inside the mod.

About new GC. There will be new GC from Legacy and Clone Wars, much similar at concept to the Insurrection GC. I will not remove the older but I go to make these new.

Other GC in development will be a GC from the new canon. Just with Resistance and First Order units but starting it the Aftermath era. It is after Endor. You have seen how I have added units from this factions the past months.

Somebody asked me many times about if I would add the First Order or Resistance as single factions. As you see, it is not neccesary. They can be added in a GC alone running better and without the problems from a single faction.

And well, I have revealed most of my work for the next year or more. Do not ask dates because I do not go to answer you. 😉