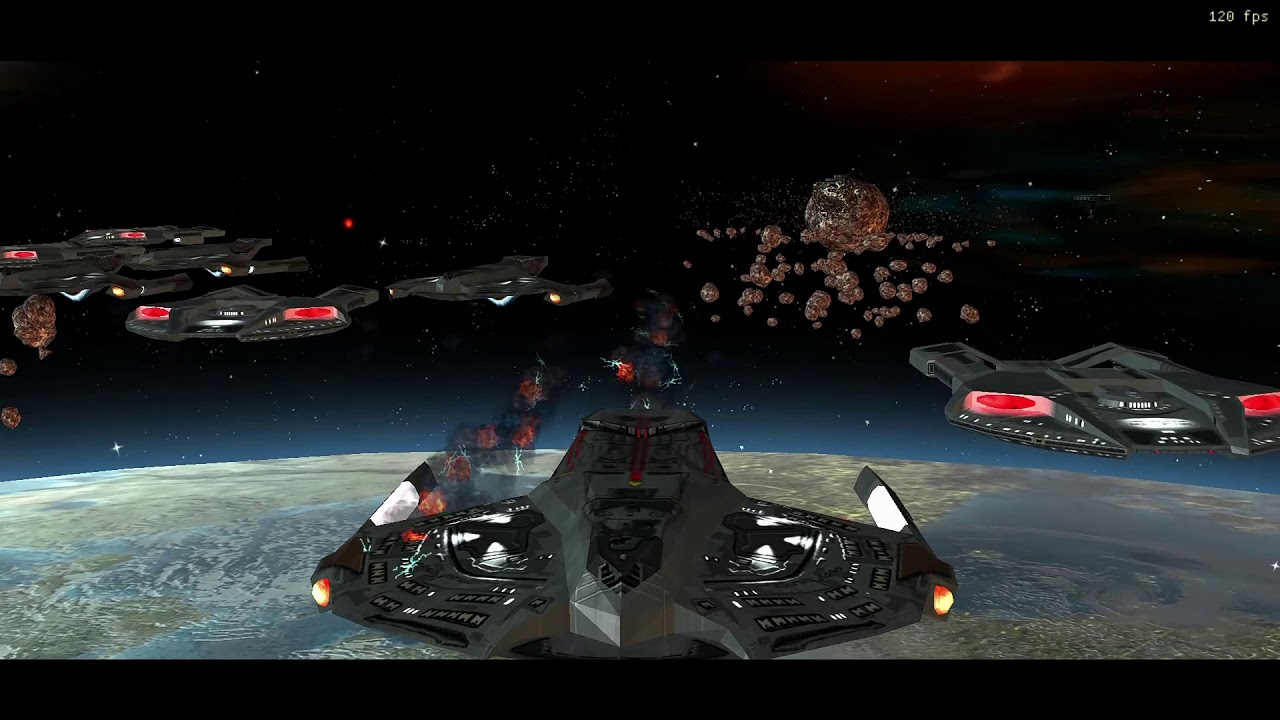 Another week and more progress. This week, I have been with working with the new additional factions. They are the Mirak, Gorn, Hydran, ISC and Lyran. In time there will be more but by the moment I have these races as in the old Star Fleet Command II game, curiously named Empires at War.

In the previous version from the mod, these factions had not more of one starbase level and it could be enough in galactic conquest but in skirmiss it could be a problem, specially because without different research levels, the AI could easily to build a big fleet destroying all your defenses easily.

Now I have added several level stations for each one of these factions but I have not made the usual variants. These new variants add external turrets with weapons as a defense ring.

As you can look at this image, the model add several objects around it, they are phaser turrets. It was a very good idea, simple, easy of to create and fun.

At the same time, I improved all the models from these races as in the other main races. I have added smoke damage effects, simple shadows, weapon improves and more. Probably you will be thinking what is a simple shadow. As you can look, these models have lights painted in the texture, if I had added complex shadows, it had overwritten these lights and it had showed them badly. Now the simple shadows do not proyect too much shadows inside the model but they proyect shadows over other models when they fly over them and close. These are simple shadows. Of course, I can make simple shadows faster than complex shadows and with the amount of different models, better a faster work.

As always I have recorded a video. The first half of the video shows a very fun space skirmiss battle where you watch several additions and improves. First the weapons/shield recharge balance, nothing is invencible now, most powerful units can make more damage and weaker units can make less damage.

Everything have been re-calculated to be very balance where a heavy photon torpedo can not down a shield more of a 20% in a heavy unit. Following this rule, a ship as the Galaxy from TNG era can fire four torpedoes in the front launchers and it will need its phasers if it want break the shields from a similar ship.

Of course, most modern units are most powerful than older units. It is a fact and some special weapons or abilities can make more damage.

About new additions, I added the Saber class from SFC3. It was a small and beautiful frigate. Smaller than a Steamrunner or Norway. But very useful. These units are more as destroyers or heavy assault frigates. They are not researcher ships and they have many good weapons for their size. Anyway, in a skirmiss battle, first you will need more quantity. You can build a very powerful unit but with one unit…..you will not be alive too many time.

The Defiant is in the mod but I have not added the correct pulse phasers. I must work a bit with the weapon effects and I prefer to make it when I make other things.

There were small problems, the usual with new additions, some bad hardpoint and few more but the battle was very very fun for me.

But the Borg can be a bit more difficult because they use several beam weapons, I do not know how I go to make them. It will be a challenge.

This at least in space because I do not go to add these races without the ground part, it would be pitiful when I have added it for the other races. Anyway, I would not make it if I had seen it as impossible.

The second part from the video is from the Galactic Conquest. I have not added too much inside this part yet but it runs and I can check several things from it. Specially the ground part, there are many things which they can be improved easily. I do not go to make better models or textures, it was a lot of work the creation of all these things in first place and I do not go to send them to the trash, it is a fact. It would be very stupid. They work and they are fun but I can improve them.

About the future, probably I will add some new ground unit in the future, of course from the new races but probably from the others. Not a lot but perhaps a few of them.

Well watch the video, I will continue working in the mod. Do not ask dates, it is stupid, when a work is made for free and with free time, give release dates is a thing from complete assholes and people making more pure theater than real work 😯 . Just I can show you how usually I finish my proyects in not a big amount of time. 😉